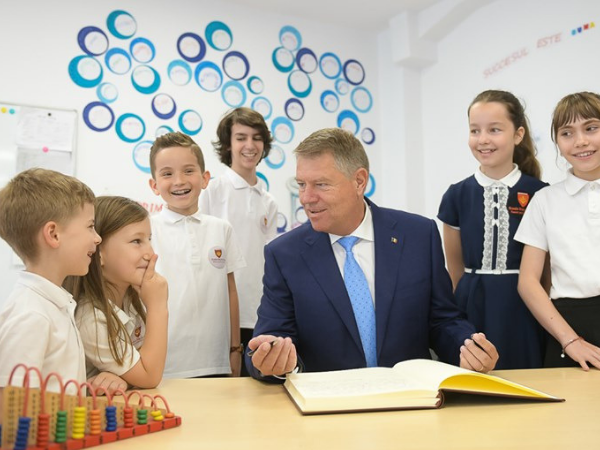 On June 1, while many countries around the globe celebrated Children’s Day, Romania’s President, Klaus Iohannis, visited the Step by Step Primary and Secondary School in Bucharest. The President attended the opening of the Art Exhibit “PET – CAT – PLANET”, with art made by children entirely from recyclable objects. The President received a gift from the children: a cat made of recycled materials.

Four children acted as the President’s guides, showing him a typical day in their school. The Step by Step Program, which was launched in Eastern Europe by the Open Society Foundations 25 years ago, is promoted in kindergartens and schools throughout Romania by the Step by Step Center for Education and Professional Development.

In the Guestbook of the School the President wrote: “A school which educates happy children and which encourages creativity is, and will always be, a successful school! It was a joy to be the guest of the Step by Step School, an educational center which brings up a generation of active children, who believe in their own potential. The successes of children are possible due to a community of educators clearly focused on innovation. I wish you success for many years to come.”

Read more in an article in English on Agerpres.