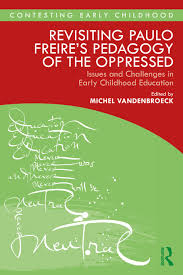 This reflection on Paulo Freire’s seminal volume, Pedagogy of the Oppressed, examines the lessons learnt from Freire and their place in contemporary pedagogical theory and practice. Freire’s work has inspired ground-breaking research which Vandenbroeck has collated, demonstrating the ongoing influence on early childhood educators.

Vandenbroeck brings together an international cohort of early childhood experts to present crosscultural perspectives on the impact of Freire’s research on education around the globe. This book covers discussions on:

- The background to and impact of Freire’s work

Vandenbroeck concludes with a vision for theorising and implementing emancipatory practice in early childhood education in contexts of neoliberalism. An insightful resource for academics and students in the field of Early Childhood Education and Care, Revisiting Paulo Freire’s Pedagogy of the Oppressed is a benchmark of the progress made in the field over the last half a century.

Comments from the U.S. by Mark Nagasawa (Bank Street College of Education)