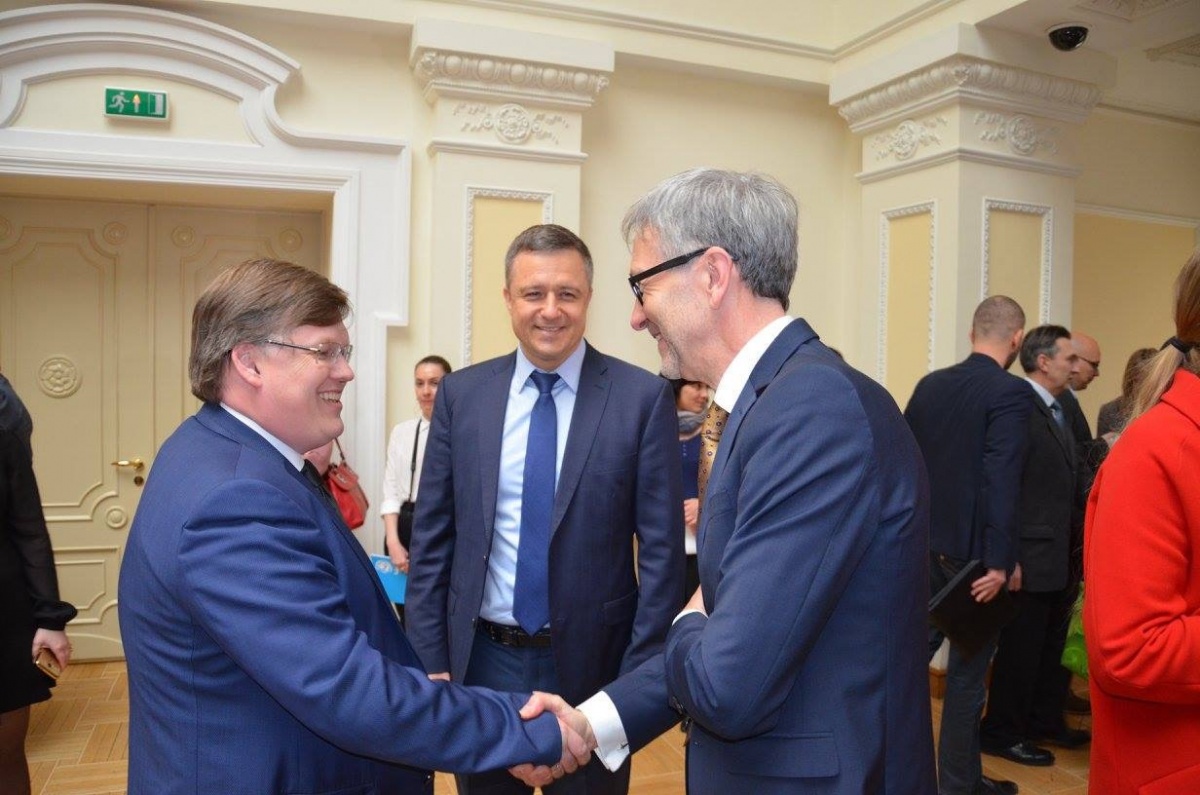 This month’s Member in Focus is Eric Bloemkolk, Director of SOFT Tulip Foundation. SOFT Tulip is a small organization with a huge network. This network includes seven major service providers and 25,000 people. They’ve offered their training services in Moldova, Serbia, Hungary and, most recently, have big news from Ukraine.

SOFT Tulip, UNICEF, the National Assembly of People with Disabilities of Ukraine, Early Intervention Institute of Kharkiv, All Ukrainian Foundation for Children’s’ Rights and Eurlyaid, signed an Memorandum of Understanding (MoU) with the Ukrainian Ministers of health, social policy and education & science. After 10 years working on training professionals and parents and on advocacy in Ukraine, Mr. Bloemkolk has achieved a major success. An action plan for the pilot, “Creation of a system to provide early intervention services” was developed as part of lobbying done by these civil society organizations.

The action plan lays out a structural change that will take place to introduce an early intervention services system. Mr. Bloemkolk points out that it will lead to more intersectoral cooperation between medical centers, children’s day care centers, kindergartens, etc. “E.g. the Early Intervention system in Kharkiv is a good example, by working with one another it stimulates learning within the region,” he said. The structural change should mean not only a higher level of quality care for children, but also that disabilities and developmental delays are caught sooner, and that support is given to parents to stop the process of children and babies being abandoned at institutions for care.

The action plan, which was approved by the Cabinet of Ministers in December of last year, is being implemented from 2017-2020 and has four main tasks, including:

The MoU, signed April 13th, will bring this plan fully into action and introduce the provision of early intervention services for children into practice. SOFT Tulip’s partners in Ukraine, will carry out the pilot project in four regions; Trans Carpathian, Lviv, Odesa and Kharkiv. These regions have different challenges and potentials, which makes them a good base for seeing how this action plan can roll out in different ways across the country.

This achievement was not won without a great deal of effort and determination. Ten years ago, Mr. Bloemkolk was introduced to the devastating living situations of children with disabilities in Ukrainian institutions. The horrid conditions in these institutions led Mr. Bloemkolk to the question, “what can we do to prevent children from getting in these situations?” This question sparked the creation of several close working relationships. SOFT Tulip began training trainers in cooperation with Dzherelo Day Care and Rehabilitation Centre of Lviv. In cooperation with the National Assembly of People with Disabilities of Ukraine and four ECI centers from Kharkiv, Lviv, Uzhgorod and Odessa they began developing a network of partners who would strive for an end to the institutionalization of children with disabilities and empower parents.

Of the attainment of this long sought goal, Mr. Bloemkolk said, “Ten years ago it was a dream. You never know if or when it will happen.” Never losing sight of that original dream is what helped this MoU to fruition.

Their strategy for lobbying included the government and high-level stakeholders – even when there was little interest from those parties. The end result is a plan created through cooperation, rather than through conflict with these parties. Mr. Bloemkolk points out that he was fortunate to work with partner organizations who shared the same vision of an inclusive plan that would be sustainable in the Ukrainian context.

Of course, SOFT Tulip is not only focused on advocacy and policy change. The organization also focuses on professional development through training, twinning and exchange programs. In a surprising turn, SOFT Tulip’s trainers have gone from having to fight to get into Ukrainian institutions to being invited to train their workforce in best practices. In fact, Mr. Bloemkolk mentions that, “Officials became motivated after their visits to the Netherlands to support the policy changes we were striving for.”

Ukraine is very different than it was 10 years ago. According to Mr. Bloemkolk, “The will for reform in general exists, but resistance within the present post-Soviet care system remains and capacities for implementation still are scarce.”

Mr. Bloemkolk suggested other organizations follow suit. “Early childhood intervention, as it is focused on the development of children can be a very strong cause for NGOs to lobby or advocate for. The wellbeing of young children and families is not so politicized and is relatively easy to find support. The role of parents in this process is crucial. When you have good practice you have to lobby to make your good practice part of the system,” he said.

SOFT Tulip, along with their Ukrainian colleagues, have succeeded in doing just that – making their best practices part of the system.

To read more about the signing of the MoU click here. Find the MoU text here.