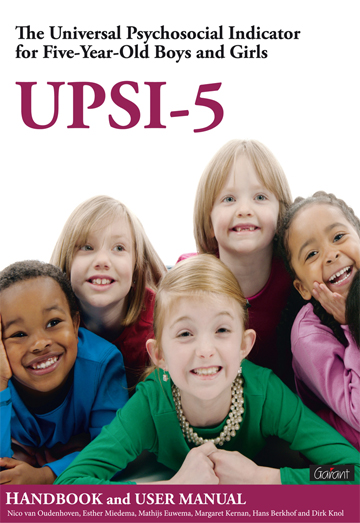 UPSI- 5: The Universal Psychosocial Indicator for Five-Year-Old Boys and Girls

The UPSI-5 is an easy to administer instrument to measure the psychosocial well-being of 5 year old children. The UPSI-5 consists of 29 questions which can be filled in by someone, for example a teacher or a social worker. The UPSI-5 provides an urgently needed counterpart to the strictly physical indicators and mortality indicators commonly used to measure young children’s well-being and survival.

The UPSI-5 can be used for comparative research, programmatic as well as for lobby and advocacy purposes. Specifically, the UPSI-5 might be used:
- For baseline and evaluation of programmes aimed at improving young children’s (psychosocial) well-being;
- Comparative research, for instance drawing comparisons between provinces/ regions in a particular country as well as between countries;
- Longitudinal study, whereby comparisons are made at different points in time over longer periods of time;
- Analysis of correlations between the UPSI-5 of a population of children and other indicators such as under five mortality rates (U5MR), school enrollment and achievement indicators, socio-economic status, and other relevant social and health related indicators. In a similar vein, UPSI-5 results might be used against the backdrop of an analysis of current child welfare and protection policies;
- Finally, we expect that the UPSI-5, in combination with, for instance, correlations with health and welfare indicators, can be used as powerful means to support broad child welfare lobby and advocacy initiatives.