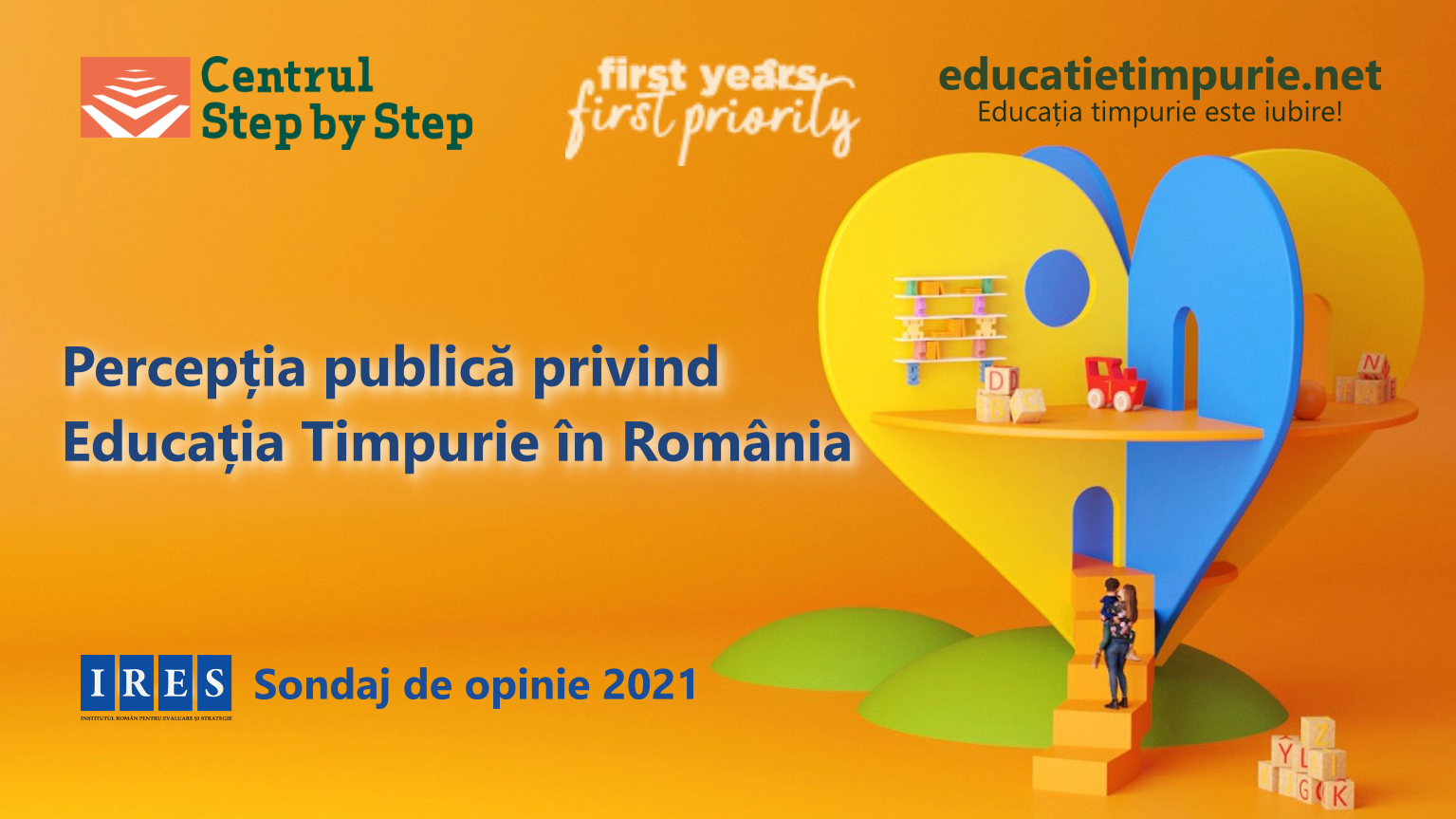 Bucharest, April 9th, 2021 - Parents in Romania are aware of the importance of education for a child’s development, however they associate the outcomes of education with discipline, conformism and school performance, while creative and independent children are desired by less than 1 in 6 respondents, as revealed by the PUBLIC PERCEPTION REGARDING EARLY CHILDHOOD EDUCATION IN ROMANIA survey, taken on behalf of the Step by Step Center for Education and Professional Development.

The research, conducted by the Romanian Institute for Assessment and Strategy at the beginning of March, using the CATI method on a nationally representative sample of 1303 individuals over 18 years of age, includes a maximum tolerated error of +/-2.8%.

According to the study commissioned by the Step by Step Center, 61% of respondents spontaneously mention education as being important in a child’s development, compared to 13 other key needs, besides basic ones: food, health and parents’ affection.

However, Romania registers a significant deficit in respect to understanding the concept of Early Education, unknown to two thirds of respondents, ratio found even among parents of preschool-aged children.

Moreover, role expectations regarding child education show major differences between social categories, and seriously raise the issue of modulating parent expectations through the landmarks of the Romanian education system.

Thus, the outcome of education as viewed by parents should be respect, decency, discipline, and good school results, which shows rather a sort of social conformism than creative independence, mentioned by fewer than 1 in 6 respondents, the drawn conclusion being that a creative and independent child is rather undesirable for respondents, while a respectful, conformist child with good school results is preferable, according to the Step by Step Center.

On the other hand, only 1 in 3 participants in the survey considers the crèche offer as being sufficient, and 1 in 5 mentions there are no such early childhood education services in their locality.

Regarding the deciding factors when choosing a crèche or kindergarten, the main criteria mentioned for selection are closeness to residence, personnel qualifications, equipment and quality of spaces, as well as authorizations received.

The survey shows that before suspension and only 3 months after enforcement of current law, the possibility of employers covering early education expenses within 1500 lei was known by 25% of parents of children under 18 or potential parents, the ratio being significantly higher among highly educated people and in the urban environment.

Carmen Lică, executive director of ISSA Member, Step by Step Center for Education and Professional Development, is of the opinion that public dialog on the topic of early education needs to focus on the importance and benefits of investment in this age group.

“The survey shows that emphasis needs to shift from the paradigm of security to that of development, in which we introduce equal measures of learning, health, care and diet. Public policies need to support the development of high quality early education services through personnel qualification, standardization of equipment and authorization, so that the process of education may take place under safe conditions”, states Carmen Lică.

The PUBLIC PERCEPTION REGARDING EARLY CHILDHOOD EDUCATION IN ROMANIA survey is part of the Step by Step Center’s mission to document and promote early childhood education in Romania and took place in the opening of the “Early Education Is Love – educatietimpurie.net”  radio-tv-online campaign, with subsequent integration in the European “First Years, First Priority” advocacy campaign.