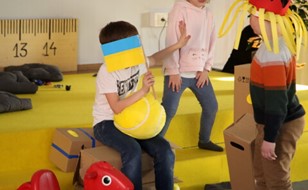 At the start of the war, the Center for Education Initiatives was approached for help by the Latvian Ministry of Education. A tense situation had arisen in Latvian schools involving conflict, tension, and bullying between children over the war in Ukraine. Latvia has a large Russian population and very mixed ethnicity schools, with Latvians, Russians, Ukrainians, and Belarussians.

“The conflict in schools reflected parents’ attitudes to the war at home and in society, and teachers were not equipped to deal with these situations.” For example, in some schools it was forbidden to discuss the war with children in classrooms.

- Daiga Zake, Director of the Center for Education Initiatives

In response to the Latvian Ministry of Education’s request for support, the Center for Education Initiatives compiled, translated, and disseminated recommendations for educators based on resources gleaned from the wide-ranging international experiences of the ISSA Network.

According to Daiga, “the main aim was to empower the educator’s and strengthen their belief that with the aforementioned resources, and their leadership skills and training that they are the most principled people in the situations of conflict that they find themselves in, and that they have the means to respond professionally and responsibly to the needs of both children and families.”

Now, more than three months since the start of the war, the situation in schools has stabilized. However, any conflict and tension between children is still being closely monitored. Daiga says that in this next phase of the response the area of focus has changed. She says that teachers and educators working with the parents of Ukrainian refugee children must be able to resolve various individual problem situations that arise. The Centre for Education Initiatives is providing advice to these educators on how to communicate with parents when signs of psychological crisis manifest in their children.

Including Ukrainian children in the system